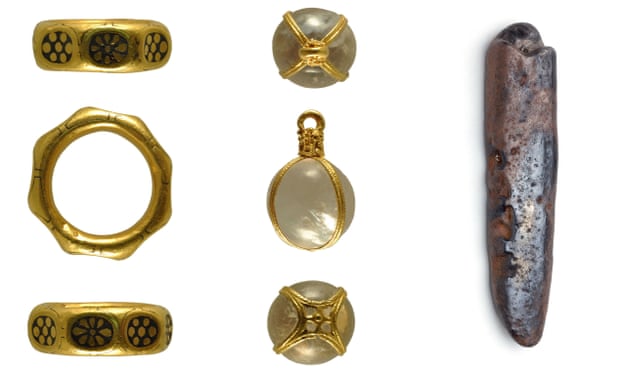 A ring, crystal pendant and ingot found in the haul. Photograph:

Two metal detectorists who unearthed an astonishing hoard of gold jewellery, silver ingots and coins buried more than 1,000 years ago by a Viking warrior in Herefordshire face prison after being found guilty of theft.

George Powell and Layton Davies should legally have declared the find, estimated to be worth more than £3m, but instead they began to show it to dealers and tried to sell parts of it off.

Among the jewellery, which dated from the fifth to ninth centuries, was a ring, an arm bracelet and a small crystal ball held by strips of gold that would have been worn as a pendant.

The jewellery and one ingot have been recovered but the vast majority of the 300 Anglo-Saxon coins that police believe were found remain unaccounted for, to the frustration and anger of historians who see the hoard as hugely important.