Coming back to Norway meant that Harald Hardrada had two relatives to deal with – Sweyn and Magnus. It would make for an interesting path to the Norwegian throne.
By 1043 the wheel of fortune had turned once more, and the family of Harald Hardrada was triumphant. While Harald had busied himself in his exile waging war across the wine-dark sea in the employ of the empire of the Romans, his nephew Magnus, the illegitimate son of Harald’s half-brother King Olaf II, had become the figurehead of a powerful bloc of Norwegian aristocrats disaffected by the burdens and excesses of Danish overlordship. With their support and after a decade of warfare, Magnus was able to not only secure his hold on Norway, doing much to establish and disseminate notions of royal authority, but also capture the throne of Denmark. Their traditional enemies and tormentors had all fallen by the wayside or been bent to purpose. Cnut the Great and his sons, their power fragmented by internecine rivalries and squabbles, all fell victim to illness and tragedy while the Norwegian aristocrats who had overthrown and then slain Olaf II had all reconciled themselves to Magnus and the notion of Norwegian kingship.
Magnus, whose role in the political unification of Norway and establishment of the kingdom has all too often been overlooked and undervalued, is known to history as Magnus the Good. He earnt this epithet we are told by the 13th-century saga material because rather than seek revenge against his father’s killers and perpetuate a destructive blood feud, Magnus chose to forgive them and work together in challenging Danish hegemony over Norway. Of course, Magnus was only eleven when he was first proclaimed king in 1035, therefore despite the support of several powerful advocates, such as his stepmother Queen Astrid and her brother King Arnud Jacob of Sweden, the extent to which he could have struck back against his aristocratic sponsors is highly questionable. Harald’s epithet of Hardrada on the other hand translates into English into something along the lines of the severe or stern. Wars fought between those famed for their decency and gentleness of heart and those known for their severe and forceful nature seldom last long.
And it was to be war, for Harald arrived in Scandinavia intent upon seizing the throne of Norway for himself. Perhaps he felt like he had come too far, seen too much and served too many simply to present himself to his nephew as just another poor relation, a potential military proxy and advisor in a royal court already replete with vested interests and aristocratic affinities. Harald had departed Constantinople with considerable haste with a meagre handful of ships and a few hundred diehard followers at the most. Yet he was a force to be reckoned with.
Read the rest of this article...
Posted by David Beard MA, FSA, FSA Scot at 17:57

The Value and Power of Books in Anglo-Saxon England The St Cuthbert Gospel of St John. (formerly known as the Stonyhurst Gospel) is the oldest intact European book

Despite the ‘Dark Ages’ myth, Anglo-Saxon England actually had an impressive wealth and sophistication, and books were prized possessions. The printing press was still centuries away and so the creation of each book required a painstaking amount of time and effort. Thus, those available became symbols of power and wealth and were highly-valued among the upper echelons of Anglo-Saxon society.
In what different ways did books hold such value and power during this period?
Valuable possessions

One of the most notable figures who placed high value on literature was King Alfred the Great. His famous beautifully-crafted jewel, the Alfred Jewel, is thought to have originally been the handle of his reading stick, used for pointing at words when reading.
We also know Alfred championed the making of books. In the mid 880s, Alfred summoned Asser, a Welsh monk from the monastery at St David’s, to write the Life of King Alfred – while the king was still alive.
Read the rest of this article...
Posted by David Beard MA, FSA, FSA Scot at 17:52

Landscapes of the Norman Conquest 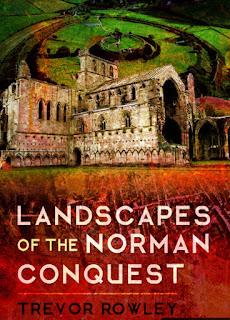 An exciting new book “Landscapes of the Norman Conquest” by Trevor Rowley has now been published.

For a long time, the Norman Conquest has been viewed as a turning point in English history; an event which transformed English identity, sovereignty, kingship, and culture. The years between 1066 and 1086 saw the largest transfer of property ever seen in English History, comparable in scale, if not greater, than the revolutions in France in 1789 and Russia in 1917. This transfer and the means to achieve it had a profound effect upon the English and Welsh landscape, an impact that is clearly visible almost 1,000 years afterwards.

Although there have been numerous books examining different aspects of the British landscape, this is the first to look specifically at the way in which the Normans shaped our towns and countryside.

The castles, abbeys, churches and cathedrals built in the new Norman Romanesque style after 1066 represent the most obvious legacy of what was effectively a colonial take-over of England. Such phenomena furnished a broader landscape that was fashioned to intimidate and demonstrate the Norman dominance of towns and villages.

The devastation that followed the Conquest, characterised by the ‘Harrying of the North’, had a long-term impact in the form of new planned settlements and agriculture. The imposition of Forest Laws, restricting hunting to the Norman king and the establishment of a military landscape in areas such as the Welsh Marches, had a similar impact on the countryside.

You can find further details here… 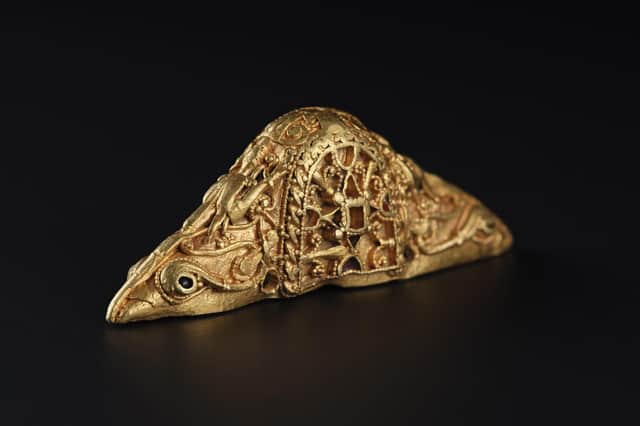 The solid gold sword pommel was found near Blair Drummond and is valued at £30,000.
An “exceptionally rare” solid-gold sword pommel discovered by a metal detectorist and which dates back to the early medieval period has come into the ownership of Scotland’s national museums.
The impressive find was located near Blair Drummond, Stirling, and is believed to date back to 700AD.
Measuring 5.5cm wide and weighing 25g, the golden pommel – the fitting at the top of the handle – is valued at £30,000.
On recommendation of the Scottish Archaeological Finds Allocation Panel, the King’s and Lord Treasurer’s Remembrancer allocated the find to National Museums Scotland (NMS), which described the item as “exceptionally rare”.
Read the rest of this article...
Posted by David Beard MA, FSA, FSA Scot at 16:25 Volunteers working with Suffolk County Council fully excavated post holes on the east side of the hall
A royal hall of "international importance" that dates back 1,400 years has been unearthed on private land.
The Hall of the first Kings of East Anglia was discovered in Rendlesham, Suffolk, over the summer.
Prof Christopher Scull said it was the "most extensive and materially wealthy settlement of its date known in England".
It was discovered by a community dig as part of Suffolk County Council's Rendlesham Revealed project.
Read the rest of this article...
Posted by David Beard MA, FSA, FSA Scot at 16:35