The bones of a foetus and its heavily pregnant mother have been found in a chamber of All Saints church in York, where three men were found “shoved” into a tomb with grave markings designed to ward off evil spirits during the early 13th century.Ancient serviceable drains, pottery fragments dating from Roman times to the 18th century, entrenched Viking pottery and Anglian pieces with possible links to the baptism of St Edwin, the 7th century King of Northumbria, have also been discovered in the Lady Chapel, where a medieval-style tile pavement has been laid in an English parish church for the first time in 500 years. 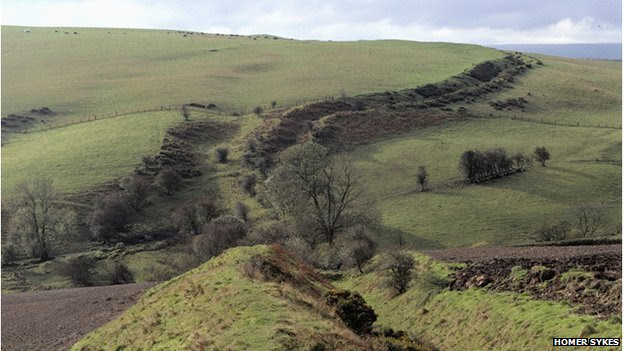 
Archaeologists have uncovered evidence which suggests that Offa's Dyke may have been built up to 200 years earlier than thought.
Samples from Clwyd-Powys Archaeological Trust excavations on a stretch of the dyke have been radiocarbon dated to the second half of the 6th Century.
Historians have always associated the dyke with King Offa who ruled the kingdom of Mercia in the 8th Century.
But now archaeologists believe it might have been in use before he ruled.
The trust said it was a "tremendously exciting discovery".
The excavations were taken from a section of the protected ancient monument at Chirk near the Shropshire border.
Read the rest of this article...
Posted by David Beard MA, FSA, FSA Scot at 13:22