The Staffordshire Hoard - Unveiling the story so far 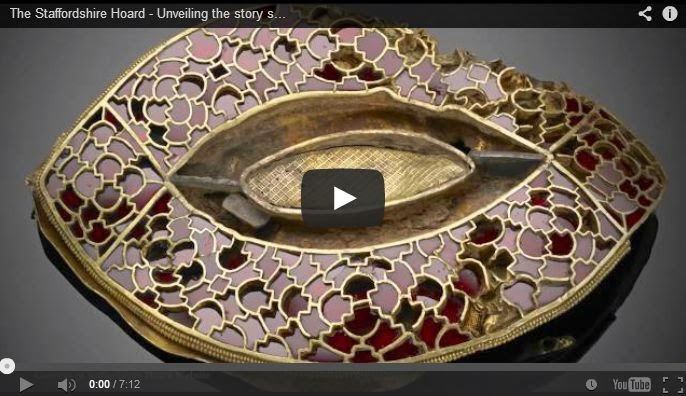 The Staffordshire Hoard is the largest hoard of Anglo-Saxon gold ever found. In this film we find out about the first stage of conservation work on the artefacts …and what secrets have been revealed.

The burial mound at Sutton Hoo, one of Britain's most important archaeological sites, where Anglo-saxon treasures were found. Photograph: Garry Weaser/The Guardian


The home of the Anglo-Saxons who built the world famous burial mounds at Sutton Hoo in Suffolk, where a king was laid with golden treasure heaped around him, has been discovered on nearby farmland a few miles from the site.
The finds from Rendlesham, which will go on display for the first time this week at the National Trust's Sutton Hoo visitor centre, include fragments of exquisite gold jewellery comparable in workmanship, if not in scale, to the Sutton Hoo treasures, pieces of gilt bronze horse harness, Saxon pennies and metal offcuts from a blacksmith's workshop.
The 50-hectare (123.5-acre) site, four miles north-east of Sutton Hoo, was discovered by archaeologists after a local landowner, Sir Michael Bunbury, became concerned about nighthawks – treasure-hunting thieves who use metal detectors. The archaeology unit of Suffolk county council has for five years been surveying his fields, using aerial photography, soil analysis, ground-penetrating radar and metal detecting, eventually pin pointing the 50 hectare Anglo Saxon site within 160 hectares of farmland.
Read the rest of this article...
Posted by David Beard MA, FSA, FSA Scot at 15:58


A lost settlement which housed the Anglo-Saxon royalty who created the famous Sutton Hoo burial mounds has been unearthed.
Archaeologists say they have found conclusive evidence of the high-status settlement in fields near the village of Rendlesham, Suffolk.
It is thought fragments of gold jewellery, Saxon pennies and weights associated with trade, are evidence of the "the king's country-seat of Rendlesham" mentioned by the Venerable Bede in the 8th century.
Professor Christopher Scull, of Cardiff University and University College London said: "The survey has identified a site of national and indeed international importance for the understanding of the Anglo-Saxon elite and their European connections.
"The quality of some of the metalwork leaves no doubt that it was made for and used by the highest ranks of society.
Read the rest of this article...
Posted by David Beard MA, FSA, FSA Scot at 15:55

The remains of an 800-year-old monk that have been uncovered after his legs were spotted sticking out of cliff in Monknash, South Wales Photo: Wales News Service

The legs of an 800-year-old medieval monk have been discovered, poking out of a cliff face in Wales.
Although badly damaged and missing their knees, shins and feet, the thigh bones were found after the fierce recent storms caused severe coastal erosion.
They were spotted by rambler Mandy Ewington, who sent a photograph to coastal archaeologist Karl-James Langford.
Mr Langford, 39, said "I thought she must have been mistaken but I went down to see for myself and thought: "Bloody hell,this is amazing!
"You can clearly see a grave has been eroded into the sea.
Read the rest of this article...
Posted by David Beard MA, FSA, FSA Scot at 15:20

There are ghosts at the British Museum.

Hulking, hairy, bloodthirsty warriors grunting in unison as they row the biggest warship of its kind the world has ever known.

Can the gallery curator see them, or am I the only one? He laughs -- a little nervously: "Yes, you do get a sense of them."

Looming before us is Roskilde 6, the largest Viking ship ever discovered, carefully reconstructed after 1,000 years languishing beneath the waves. At 37 meters long it's double the size of the boat Christopher Columbus sailed to America.

Ghost armies or not, it is a sight to behold. The ship's fearsome metal frame seemingly rises from a watery netherworld on a mission to conquer the globe -- once and for all.

The Vikings are here…

Lo, it is nearly thirty-five years since the Vikings last came to this Museum, and nobody believed that such an influx of fantastic material from overseas (as well as the UK) could be made…*

To be fair, the BP exhibition Vikings: life and legend lacks some of the drama of the original Viking attack on Lindisfarne in 793. We haven’t had fiery dragons in the sky (unless you count the Aurora Borealis coming unusually far south), and there hasn’t been much in the way of destruction or slaughter. Nor is it likely that this exhibition will be remembered 1200 years after the event, although in an age of globalised communication, there is no doubt that the exhibition has attracted considerably more notice in the last few days than the attack on Lindisfarne did at the time. Nevertheless, as the largest Viking exhibition in the UK for over 30 years, it has the potential to shape our definition of the Viking Age.
Read the rest of this article...
Posted by David Beard MA, FSA, FSA Scot at 18:41