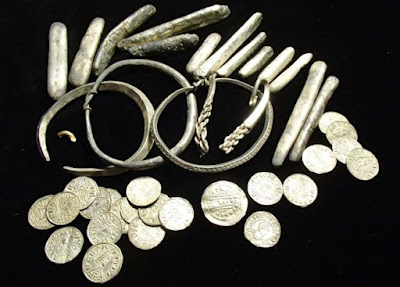 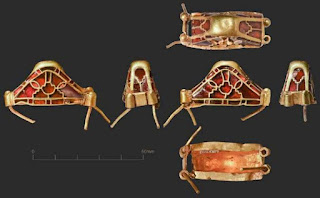 A trove of Viking jewelry and Saxon coins unearthed by an amateur treasure-hunter in a farmer's field may help rescue an English king from obscurity.
The Watlington Hoard, a collection of silver bands, ingots and 186 coins unveiled at the British Museum Thursday, dates from a tumultuous period. The coins were minted during the reign of Alfred the Great, ruler of the Anglo-Saxon kingdom of Wessex, who battled a "great heathen army" of Viking invaders during the 9th century.
By coincidence, discovery of the hoard coincides with the broadcast of "The Last Kingdom," a big-budget BBC drama series that has boosted popular interest in the conflict between Alfred and the Vikings.
Alfred is renowned as the ruler whose victories helped create a unified England, but some of the coins in the hoard also bear the name of the far more obscure King Ceolwulf II of Mercia, a neighboring kingdom to Wessex.
"Poor Ceolwulf gets a very bad press in Anglo Saxon history," said museum coins curator Gareth Williams. What little is known of him was written at Alfred's court and paints Ceolwulf as "a puppet of the Vikings."


A hoard of Viking coins could change our understanding of English history, after showing how Alfred the Great 'airbrushed' out a rival king

A Viking hoard discovered by an amateur metal detectorist could prompt the re-writing of English history, after experts claimed it shows how Alfred the Great “airbrushed” a rival king from history.
Ceolwulf II of Mercia is barely mentioned in contemporary records and largely forgotten by history, only briefly described in the Anglo-Saxon Chronicle as an “unwise King’s thane”.
But as of today, his reputation might be rescued after a haul of coins dug up after more than 1,000 years suggested he in fact had a powerful alliance with Alfred, ruling their kingdoms as equals.
Read the rest of this article...
Posted by David Beard MA, FSA, FSA Scot at 17:56