Researchers from the University of Leicester will be shedding new light on how an ‘agricultural revolution’ in Anglo-Saxon England fueled the growth of towns and markets as part of a new project investigating medieval farming habits. 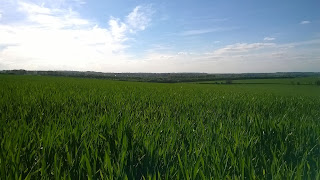 The project, titled ‘Feeding Anglo-Saxon England (FeedSax): The Bioarchaeology of an Agricultural Revolution’, which is funded by the European Research Council, is led by the University of Oxford working with colleagues from the University of Leicester.

The period between c 800 – 1200 AD saw dramatic changes in farming practices across large parts of Europe, enabling an increase in cereal production so great that it has been described as an ‘agricultural revolution’.

This ‘cerealisation’ allowed post-Roman populations not only to recover, but to boom, fueling the growth of towns and markets.

A 1,100-year-old camp the Viking Great Army at Torksey has been brought to life in stunning virtual reality based on the latest research.

Heralded as the most realistic immersive experience ever created of the Viking world, the exhibition at the Yorkshire Museum in York runs from May 19 to November 5.

Three dimensional images and soundscape reveal what life was like in the camp of the Viking army on the banks of the River Trent at Torksey, near Gainsborough, in the winter of AD 872-873, as thousands of Vikings prepared to conquer vast swathes of England.

A major new exhibition by the Yorkshire Museum in partnership with the British Museum explores the world of the Vikings. Here are some of the treasures about to be revealed in Viking – Rediscover the Legend

A huge camp which was home to thousands of Vikings as they prepared to conquer England in the late ninth century has been uncovered by archaeologists.

Established in Torksey, on the banks of the River Trent in Lincolnshire, the camp was used as the Vikings' defensive and strategic position during the winter months.

The research, conducted by archaeologists at the Universities of Sheffield and York, has revealed how the camp was used by thousands of Viking warriors, women and children who lived there temporarily in tented accommodation.

They also used the site as a base to repair ships, melt down stolen loot, manufacture, trade and play games.

Chickens were domesticated from Asian jungle fowl around 6000 years ago. Since domestication they have acquired a number of traits that are valuable to humans, including those concerning appearance, reduced aggression and faster egg-laying, although it is not known when and why these traits evolved.

Now, an international team of scientists has combined DNA data from archaeological chicken bones with statistical modeling to pinpoint when these traits started to increase in frequency in Europe.

Experts are set to start digging for another missing English king.

After Richard III was found buried under a car park in Leicester, details have emerged of other unusual possible resting places famous monarchs.

Now, Bury St Edmunds believes it may have the remains of Saint Edmund, a Saxon monarch, buried beneath one of its tennis courts.

St Edmund was a Saxon king who ruled in the ninth century. As a saint, his remains were kept in a shrine in Bury St Edmunds.

At the time of the desecration of the Benedictine Abbey, during Henry VIII's reign, the remains were lost.