Ground breaking research and conservation of the Staffordshire Hoard has uncovered two internationally important objects that link us to an age of warrior splendour, and further our knowledge of seventh century Anglo-Saxon England.

Historic England, has given £400,000 to help reveal the secrets of the Staffordshire Hoard

and increase public understanding of this unique archaeological treasure. The research will culminate in an online catalogue, launched in 2017. The following year will see a major publication exploring the Hoard in more depth, the objects’ meanings and how they relate to each other. The owners of the Hoard, Birmingham and Stoke-on-Trent City Councils, and Birmingham Museums Trust and the Potteries Museum & Art Gallery who care for it on their behalf, have also contributed towards the research. 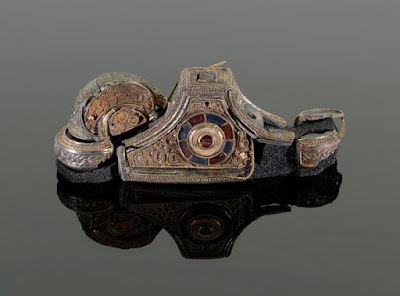 RCHAEOLOGISTS have discovered a wooden butter churn lid unearthed at Norton Bridge is from the Saxon period following scientific tests.
Evidence of prehistoric activity was uncovered in the same area of the site and archaeologists believed the butter churn could be from the same period.
But radiocarbon tests have revealed the lid of the butter churn dates from the early medieval period when the area was part of the Mercian kingdom.
The tests have put a fragment of wood found with the lid as dating between AD715-890, so the lid is from the same period as the Staffordshire Hoard.
Read the rest of this article...
Posted by David Beard MA, FSA, FSA Scot at 17:28