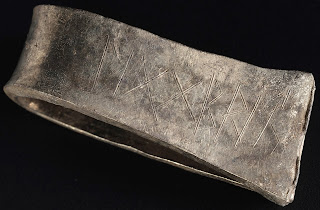 Egbert was here! Name discovered and deciphered from a runic inscription on the spectacular Galloway Hoard

Perhaps more than anything else in the hypothesis-filled world of archaeology, burial hoards invite the most conjecture. What does they mean? Who buried them and why?

Archaeologists in Scotland are however a step closer to answering these questions after they discovered a message left by one of the people who may have deposited the Galloway Hoard 1100 years ago.

Described as one of the most significant Viking discoveries ever found in Britain and Ireland, the hoard consists of more than 100 gold and silver objects from the Viking age and was discovered on Church of Scotland land in Kirkcudbright, Dumfries and Galloway in September 2014.