The Vikings are coming…


Tom Williams, Project Curator: Vikings, British Museum
Several years ago I worked at the Tower of London. Spending long periods of time within a building of such age, I would often start to wonder about how the area would have looked before the castle was built. Every morning I would pass the remains of Roman walls at Tower Bridge station, walls that were repaired and refortified by King Alfred the Great in response to the very real threat of Viking raids from the river. Blotting out the great hulk of HMS Belfast, Tower Bridge and the modern office blocks that now crowd the banks, I would try to imagine the awe and the terror that a Londoner would have felt a thousand years ago, standing on the city walls, watching the carved and gilded prows of dragon ships silently gliding up the Thames. Viking fleets and armies raided and besieged the city on numerous occasions, and the river has given up dozens of weapons that might have ended up there as a result of those conflicts.
Read the rest of this article...
Posted by David Beard MA, FSA, FSA Scot at 17:47

The sarcophagus dates back to about AD 900


A unique collection of Viking-age monuments, which lay unloved in a Govan churchyard for 1,000 years, has attracted the attention of the British Museum. Its curator said the Govan Stones was one of the best collections of early medieval sculpture anywhere in the British isles.
Govan is well-known as an industrial powerhouse which, over the past 150 years, has built an incredible number of the world's largest ships.
However the town, now part of the city of Glasgow, has a long and largely-forgotten history as one of the earliest seats of Christianity in Scotland and the main church of the Kingdom of Strathclyde, the lost kingdom of the northern Britons.
In AD 870, Vikings, who had been based in Dublin, destroyed Dumbarton at the mouth of the Clyde, which had been a major power centre in the centuries after the Romans departed from Britain.
Read the rest of this article...
Posted by David Beard MA, FSA, FSA Scot at 11:32

Hillary Term begins tomorrow at Oxford, but there is still time to enrol for one of the online courses in archaeology.

Cave paintings, castles and pyramids, Neanderthals, Romans and Vikings - archaeology is about the excitement of discovery, finding out about our ancestors, exploring landscape through time, piecing together puzzles of the past from material remains.

These courses enable you to experience all this through online archaeological resources based on primary evidence from excavations and artefacts and from complex scientific processes and current thinking. Together with guided reading, discussion and activities you can experience how archaeologists work today to increase our knowledge of people and societies from the past. 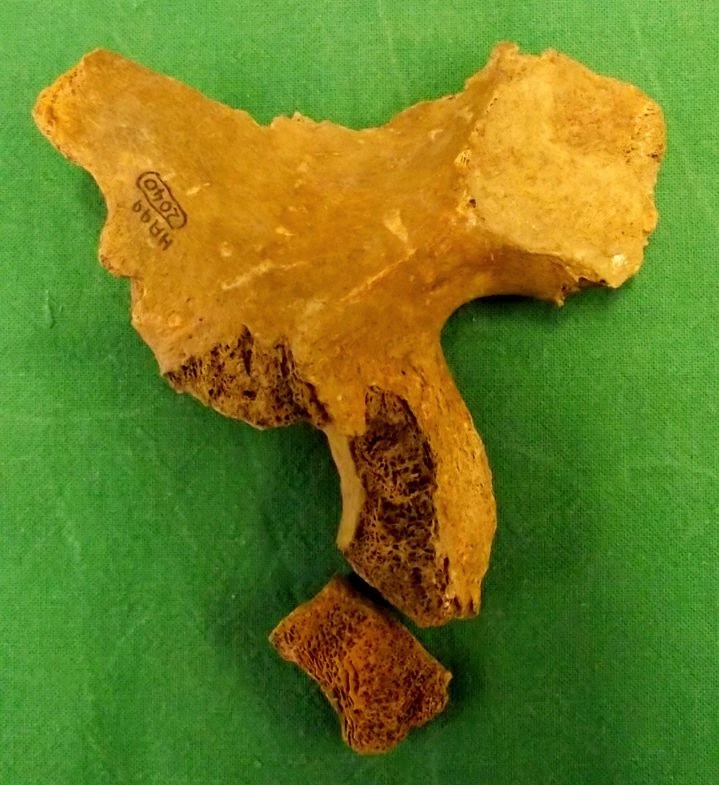 An early Anglo-Saxon pottery vessel, a skull and a bone were unearthed at one of the four graves


The remains of four Anglo-Saxon adults have been found in shallow graves during excavation work at a river in Northamptonshire.
The graves, 12in (30cm) below ground level, were found during the work to create a new backwater at the River Ise at Rushton near Kettering.
A 6th Century bowl was also found in the graves.
Archaeologists said they were "excited" by the graves, which have since been covered again with soil.
Jim Brown, senior project officer at Northamptonshire Archaeology, said the discovery of burial goods with the body remains indicated the people were "certainly pagan".
Read the rest of this article...
Posted by David Beard MA, FSA, FSA Scot at 11:39

The first remains of King Alfred the Great may have been found at last after tests on a pelvic bone unearthed in Winchester revealed it belonged to either the Anglo-Saxon King or his son Edward.
But after a high-profile excavation of an unmarked grave where the Anglo-Saxon King was believed to be buried, the location of the bone was much more mundane - a storage box in the bowels of a local museum.
Archaeologists from the University of Winchester had initially analysed six skeletons excavated from a grave at St Bartholomew's Church, the historic site of Hyde Abbey, last March.
Read the rest of this article...
Posted by David Beard MA, FSA, FSA Scot at 09:14

University of Reading archaeologists have discovered an ancient and extremely rare Anglo-Saxon board gaming piece while excavating a royal complex at Lyminge, Kent. The piece would have been used for a game similar to that of backgammon or draughts.


The Anglo-Saxon’s had a strong tradition of playing board games. Individual gaming pieces, and sometimes complete sets in burials of the period, have been discovered. However not only is the piece the first of this type to be found since the Victorian period, it is the first ever piece to be discovered in a ‘gaming’ setting, an Anglo-Saxon royal hall.

Alongside this astonishing discovery, Dr Gabor Thomas and his team have also uncovered items of jewellery, numerous fragments of luxury vessel glass and pits with animal bones, confirming that feasting and social display were integral to Lyminge’s role as a place of royal ceremonial events and gatherings during the late 6th and 7th centuries.
Read the rest of this article...
Posted by David Beard MA, FSA, FSA Scot at 16:53

Karl der Große: Macht, Kunst, Schätze - three major exhibitions which will run in Aachen from 20 June to 21 September 2014 to mark the 1200th anniversary of the death of Charlemagne.

The three exhibitions are listed as:

Places of Power
The exhibition in the town hall’s coronation hall, the former kings’ hall of the palace, focuses on Charlemagne’s imperial palaces.

Charles’s Art
At the Centre Charlemagne, a new exhibition housed in the heart of the imperial palace, the golden age of culture during the Carolingian period is presented with top-class works of art.

Lost Treasures
In the cathedral’s treasure chamber next to Carolingian Marienkirche, precious church treasures from the Carolingian period and the Middle Ages return to their original site once again.

This should prove to be the most important Carolingian exhibition since the 'Karl der Große und Pabst Leo III. in Paderborn' exhibition held in 1999.

Sweyn Forkbeard (shown left), England's shortest reigning king, remains in the shadows of both his son Canute the Great, and father Harold Bluetooth


On Christmas Day 1013, Danish ruler Sweyn Forkbeard was declared King of all England and the town of Gainsborough its capital. But why is so little known of the man who would be England's shortest-reigning king and the role he played in shaping the early history of the nation?
For 20 years, Sweyn, a "murderous character" who deposed his father Harold Bluetooth, waged war on England.
And exactly 1,000 years ago, with his son Canute by his side, a large-scale invasion finally proved decisive.
Read the rest of this article...
Posted by David Beard MA, FSA, FSA Scot at 11:25