An "exceptionally rare" ancient crucifix has been unearthed by an amateur metal detectorist. The 2cm (0.78in) tall lead object, which depicts Christ on the cross, was found in the village of Skidbrooke, Lincolnshire, by Tom Redmayne. It is thought to date from between AD 950-1150. 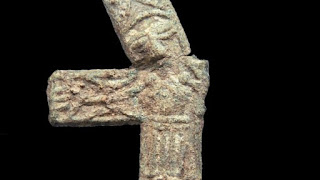 Archaeologist Adam Daubney, from Lincolnshire County Council, said it is one of only three known examples in the country.

Mr Redmayne, who found the crucifix on Sunday, said he did not initially realise the significance of his discovery. He said he knew it was a crucifix, and was possibly old due to its crude design.

However, he said it was only when he researched the item online he realised it was something special. Despite the artefact having little monetary value, he said, it offers a unique insight into the lives of ordinary people at the time.