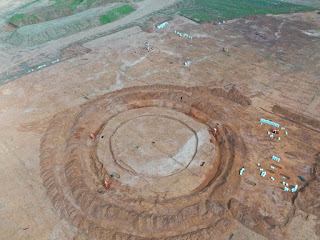 Aerial view of the excavation at Overstone [Credit: MOLA]
A team from the Museum of London Archaeology (MOLA) have excavated the largest Anglo-Saxon cemetery in Northamptonshire at Overstone Gate. Excavations were conducted over the course of 12 months, in preparation for the construction of a housing development.
154 Anglo-Saxon burials were found, containing beautiful grave goods totalling nearly 3000 objects. These included jewellery (roughly 150 brooches, 15 rings, 2000 beads, 75 wrist clasps and 15 chatelaines), weapons (roughly 25 spears, 40 knives and 15 shield bosses), and everyday objects such as cosmetic kits and bone combs. Pieces of textile, which rarely survive in the archaeological record, were found preserved next to metal objects which had caused them to mineralise. All of the finds have now been removed from site for analysis by our specialists.
Read the rest of this article...
Posted by David Beard MA, FSA, FSA Scot at 16:12