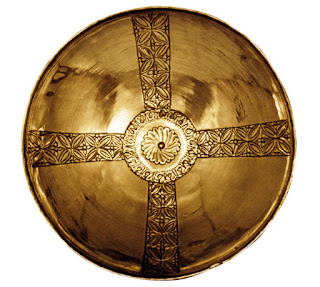 In 1939 a series of mounds at Sutton Hoo in England revealed their astounding contents: the remains of an Anglo-Saxon funerary ship and a huge cache of seventh-century royal treasure.

IN SOUTHERN ENGLAND near the Suffolk coast lies a stretch of sandy heathland dotted by mysterious mounds of earth. Inspiring strange tales and superstitions among local people, these barrows charmed newlyweds Frank and Edith Pretty, who purchased the property, known as Sutton Hoo, in 1926.

The couple made their home at Sutton Hoo for nearly nine years until Frank’s untimely death in late 1934. Edith continued to live there, and she grew increasingly curious about the barrows on her property. A lifelong fascination with the occult had led her, like many wealthy women of her time, to consult spiritualists in London. Some say that after her husband’s death, her interest in spiritualism grew and even expanded to include the barrows on her property. Disputed accounts even describe Edith as having a vision of a ghostly procession passing through the mounds near her house. Whatever the true cause, she decided in 1937 to have the land excavated and approached a museum in nearby Ipswich to discuss it.

What lies beneath
Self-taught archaeologist Basil Brown worked as an excavation assistant at the museum and took on Edith’s project. His decision to take the job not only would change his life but also radically alter, and deepen, the understanding scholars had of the early Anglo-Saxon period in England following the collapse of Roman rule.