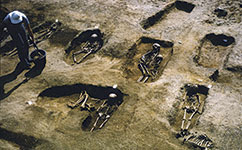 
Human remains dug up from an ancient grave in Oxfordshire add to a growing body of evidence that Britain's fifth-century transition from Roman to Anglo-Saxon was cultural rather than bloody.
The traditional historical narrative is one of brutal conquest, with invaders from the North wiping out and replacing the pre-existing population.
But a new study, published in the Journal of Archaeological Science, hints at a more peaceful process. Dr Andrew Millard, from Durham University, is one of the study's authors.
'The main controversy over the years has centred on how many Anglo-Saxons came across the North Sea,' he says.
Read the rest of this article...
Posted by David Beard MA, FSA, FSA Scot at 11:00