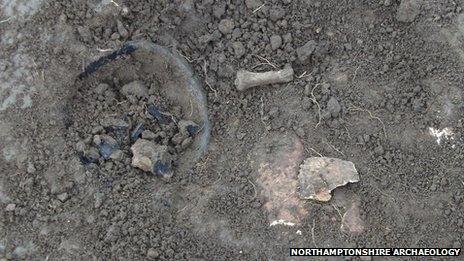 An early Anglo-Saxon pottery vessel, a skull and a bone were unearthed at one of the four graves


The remains of four Anglo-Saxon adults have been found in shallow graves during excavation work at a river in Northamptonshire.
The graves, 12in (30cm) below ground level, were found during the work to create a new backwater at the River Ise at Rushton near Kettering.
A 6th Century bowl was also found in the graves.
Archaeologists said they were "excited" by the graves, which have since been covered again with soil.
Jim Brown, senior project officer at Northamptonshire Archaeology, said the discovery of burial goods with the body remains indicated the people were "certainly pagan".
Read the rest of this article...
Posted by David Beard MA, FSA, FSA Scot at 11:39