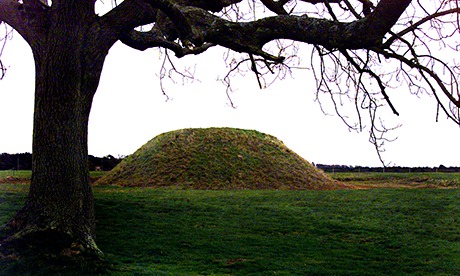 The burial mound at Sutton Hoo, one of Britain's most important archaeological sites, where Anglo-saxon treasures were found. Photograph: Garry Weaser/The Guardian


The home of the Anglo-Saxons who built the world famous burial mounds at Sutton Hoo in Suffolk, where a king was laid with golden treasure heaped around him, has been discovered on nearby farmland a few miles from the site.
The finds from Rendlesham, which will go on display for the first time this week at the National Trust's Sutton Hoo visitor centre, include fragments of exquisite gold jewellery comparable in workmanship, if not in scale, to the Sutton Hoo treasures, pieces of gilt bronze horse harness, Saxon pennies and metal offcuts from a blacksmith's workshop.
The 50-hectare (123.5-acre) site, four miles north-east of Sutton Hoo, was discovered by archaeologists after a local landowner, Sir Michael Bunbury, became concerned about nighthawks – treasure-hunting thieves who use metal detectors. The archaeology unit of Suffolk county council has for five years been surveying his fields, using aerial photography, soil analysis, ground-penetrating radar and metal detecting, eventually pin pointing the 50 hectare Anglo Saxon site within 160 hectares of farmland.
Read the rest of this article...
Posted by David Beard MA, FSA, FSA Scot at 15:58