The Viking Great Army in England: Torksey, treasure and towns


The Viking Great Army in England: Torksey, treasure and towns


From AD 865 to 879 a Viking army wreaked havoc on the Anglo-Saxon kingdoms, leading to political conquest, settlement on a substantial scale, and extensive Scandinavian cultural and linguistic influences in eastern and northern England. This critical period for English history led to revolutionary changes in land ownership, society, and economy, including the growth of towns and industry, while transformations in power politics would ultimately see the rise of Wessex as the pre-eminent kingdom of Anglo-Saxon England.

Back-to-back volcanic eruptions in the mid-6th century darkened Europe's skies for more than a year and may have ushered in the Dark Ages, according to finding to be presented Friday at a science conference in Vienna.
"Either would have led to significant cooling of Earth's surface," said Matthew Toohey, a climate modeller at the GEOMAR Helmholtz Centre for Ocean Research in Kiel Germany who led the research.
"But taken together, the two eruptions"—in 536 and 540—"were likely the most powerful volcanic event affecting the northern hemisphere climate over at least the past 1,500 years," he told AFP at a meeting of the European Geosciences Union.
Their combined impact lowered temperatures by two degree Celsius (3.6 degrees Fahrenheit) during what is probably the coldest decade in the last two millennia, he added.
This sudden drop, caused by a Sun-blocking blanket of sulphur particles in the stratosphere, had a devastating impact on agriculture, provoking famine throughout much of Europe and beyond.
Read the rest of this article...
Posted by David Beard MA, FSA, FSA Scot at 19:25

Romsey Abbey: The mystery of the hair in the coffin 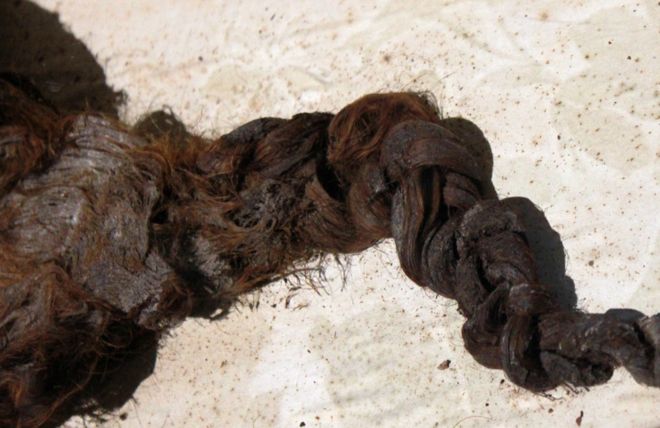 For the past few months, archaeologists have been testing a full head of hair found in a coffin. Is it the hair of a saint?
In October 1839, the work of some gravediggers came to an abrupt halt when their tools hit something hard. It was a lead coffin. Inside they found some hair. Human hair.
In the year 2000, a seven-year-old boy called Jamie Cameron went on a school trip to his local parish church, Romsey Abbey in Hampshire. It was where the gravediggers had made their discovery more than a century and a half earlier.
He was taken to a display case and was immediately drawn to the full head of hair, which was still resting on the oak "pillow" on which it was found. 
The graves of men, women and children could have contained members of the same families on Salisbury Plain

Two Neolithic monuments, prehistoric pits and an Anglo-Saxon cemetery of 150 graves containing spears, knives, jewellery and bone combs have been discovered at an army site where anti-tank weaponry was tested during World War Two.

One burial at Bulford has been radiocarbon dated to the mid Anglo-Saxon period, between AD 660 and 780. The graves have been found as part of a £1 billion Ministry of Defence development to create 1,000 homes for service personnel.
Archaeologists are now planning to excavate the monuments next to the cemetery, which are made up of Early Bronze Age round barrows and are likely to become scheduled monuments. Grooved ware pottery, stone and flint axes, a disc-shaped flint knife, a chalk bowl and deer and extinct wild cattle bones were found in the pits.