Ravagers, despoilers, pagans, heathens - the Vikings are usually regarded as bloodthirsty seafaring pirates, whose impact on Europe was one of fear and terror. As they plundered the British Isles and the north Atlantic, these pagan invaders were seen by their Christian victims as a visitation from God.

Yet the Vikings were also traders, settlers and farmers with a highly developed artistic culture and legal system. Their network of trade routes stretching from Greenland to Byzantium and their settlements, resulted in the creation of the Duchy of Normandy in France, the foundation of the Kingdom of Russia in Kiev and Novgorod as well as the development of Irish towns including Cork, Dublin and Limerick.

This course will use recent findings from archaeology together with documentary records, to examine these varied aspects of the Viking world and to give a detailed and balanced view of this fascinating period.


The skeleton of a young Christian noblewoman, who was laid to rest on a "burial bed" some 1,400 years ago, is giving archaeologists precious clues to the earliest days of the English church.

Unearthed in 2011 in a village near Cambridge (map), the teenager wore the badge of her faith in the shape of an exquisite gold-and-garnet cross, found on her chest and just visible in the picture above.

The ornate treasure marks the grave as one of the earliest known Christian burials in Anglo-Saxon England, researchers from the University of Cambridge announced last week.

Remains of dark ages princess found in field in Cambridge


The remains of a mysterious Anglo-Saxon princess, who died  thirteen and a half centuries ago, have been found in a field three miles south of Cambridge.


Aged just 16 when she died, and buried lying on a special high status funerary bed, she was laid to rest with a small solid gold, garnet encrusted, Christian cross upon her chest.

Her exact identity is as yet a complete mystery. However, it’s likely that she was a member of one of the newly Christianized Anglo-Saxon royal families of the period.


Archaeologists excavating near Cambridge have stumbled upon a rare and mysterious find: The skeleton of a 7th-century teenager buried in an ornamental bed along with a gold-and-garnet cross, an iron knife and a purse full of glass beads.

Experts say the grave is an example of an unusual Anglo-Saxon funerary practice of which very little is known. Just over a dozen of these "bed burials" have been found in Britain, and it's one of only two in which a pectoral cross _ meant to be worn over the chest _ has been discovered.

One archaeologist said the burial opened a window into the transitional period when the pagan Anglo-Saxons were gradually adopting Christianity.

The dead are often described as sleeping, but archaeologists in Cambridgeshire have uncovered a bed on which the body of a young Anglo-Saxon woman has lain for more than 1,300 years, a regal gold and garnet cross on her breast.

Three more graves, of two younger women and an older person whose sex has not yet been identified, were found nearby.

Forensic work on the first woman's bones suggests she was about 16, with no obvious explanation for her early death. Although she was almost certainly a Christian, buried with the beautiful cross stitched into place on her gown, she was buried according to ancient pagan tradition with some treasured possessions including an iron knife and a chatelaine, a chain hanging from her belt, and some glass beads which were probably originally in a purse that has rotted away.

An Anglo-Saxon grave discovered near Cambridge could be one of the earliest examples of Christianity taking over from Paganism, archaeologists said.

The skeleton of a teenage girl was found buried on a wooden bed, with a gold and garnet cross on her chest.

The grave is thought to date from the mid-7th Century AD, when Christianity was beginning to be introduced to the Pagan Anglo-Saxon kings.

It was uncovered at Trumpington Meadows by Cambridge Archaeological Unit.

The History Channel in the US and History Television in Canada have announced they will be airing a scripted drama series, Vikings. The series will chronicle the extraordinary and ferocious world of the mighty Norsemen who raided, traded and explored during medieval times. Set to premiere in 2013, the series will be filmed in Ireland and throughout picturesque locations in Northern Europe. Shaw Media will be the broadcast partner in Canada, airing the show on HISTORY Television in Canada. The announcement was made by Nancy Dubuc,

“This is an amazing crossroads for HISTORY embarking on our first scripted series,” said Nancy Dubuc, President and General Manager of History. “People think they know about the Vikings – we see references to them all the time in our popular culture from TV commercials to football teams – but the reality is so much more fascinating and complex, more vivid, visceral and powerful than popular legend. We will explore the mysteries of the Vikings – the adventures they took and the people who led them. And we will start to understand a past that is very much part of our collective DNA today.”

One of the earliest Anglo-Saxon Christian burial sites in Britain has been discovered in a village outside Cambridge. The grave of a teenage girl from the mid 7th century AD has an extraordinary combination of two extremely rare finds: a ‘bed burial’ and an early Christian artefact in the form of a stunning gold and garnet cross.


The girl, aged around 16, was buried on an ornamental bed – a very limited Anglo-Saxon practice of the mid to later 7th century – with a pectoral Christian cross on her chest, that had probably been sewn onto her clothing. Fashioned from gold and intricately set with cut garnets, only the fifth of its kind ever to be found, the artefact dates this grave to the very early years of the English Church, probably between 650 and 680 AD.


The Department of Anglo-Saxon, Norse & Celtic is sad to announce the death on 10 March 2012 of Professor Raymond Page, Emeritus Elrington and Bosworth Professor of Anglo-Saxon in the University of Cambridge, and Fellow and former Librarian of Corpus Christi College.

Born in 1924, Professor Page was an undergraduate at the University of Nottingham, and came to Cambridge in the 1960s. He became Fellow and Librarian of Corpus Christi College, and was for many years Lecturer and then Reader in Old Norse language and literature in the Department of ASNC.

From 1984 until his retirement in 1991 he was Elrington and Bosworth Professor of Anglo-Saxon. He will be fondly remembered by many for his teaching of Old Norse and of Scandinavian history in the Viking Age, and as the ‘silver-haired librarian’ of Corpus. His funeral will take place in the chapel of Corpus Christi College on Thursday 22 March at 2 p.m. 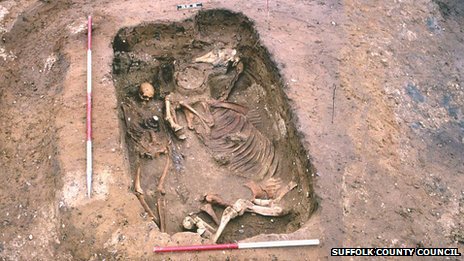 History of castle from the Saxons to Cromwell


THE February meeting of Henley Archaeological and Historical Group welcomed an expert on the history of Wallingford and the founder of Wallingford Museum.

Judy Dewey gave a presentation on the work being undertaken at Wallingford Castle. She gave the background to the history of the castle dating back to Saxon times and described what has been found during the last four to five years of a research project which is now beginning to make sense of the site.

Wallingford was an ancient walled town with fortifications, being the prime town in Berkshire in the Domesday Book. It retains its Saxon street pattern, as illustrated from an early view where the bridge can be seen on the site of what was a ford.