Conservation staff at Westminster Abbey clean the Cosmati pavement surrounding the tomb of Edward the Confessor and asses it for conservation on Sept. 24 in London, England.

The highly decorative stone pavement is formed of small precious stones such as onyx and porphyry on a base of dark limestone, known as Purbeck marble.

A shrine was erected in 1163 following the Confessor's canonisation and St Edward's body was brought in on October 13, 1269 to its new resting place.

The Cosmati pavement provides the flooring around Edward the Confessor's tomb behind the High Altar of Westminster Abbey where the Duke and Duchess of Cambridge signed their marriage register. 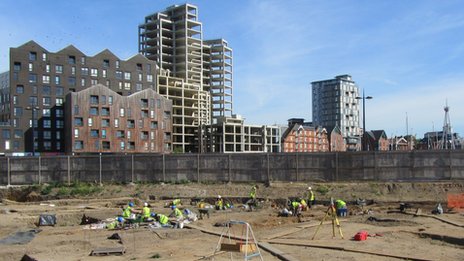 An archaeological dig at Ipswich waterfront has unearthed 300 skeletons and evidence of an old church.

The excavation is taking place before 386 homes are built on Great Whip Street by Genesis Housing Association.

It is believed the Saxons occupied the site in the 7th Century and burials are believed to have taken place there until the 16th Century.

Rubbish pits were also uncovered during the dig, led by Oxford Archaeology and Pre-Construct Archaeology.

Paul Murray, senior project officer with Oxford Archaeology, said: "A certain amount of historical research was done before we got here, so we had a general idea of what to find, but this has exceeded our expectations.