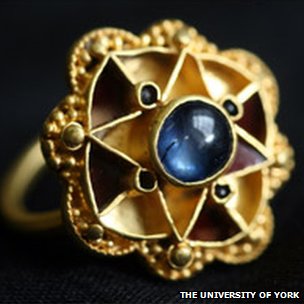 A sapphire ring found in North Yorkshire has sparked a meeting of experts to determine exactly when it was made.

The ring has baffled archaeologists because it is unlike any other according to the Yorkshire Museum.
The intricate ring, presumably made by a highly skilled craftsman, is on show at the Museum in York.
Natalie McCaul, from the museum, said the meeting may "shed new light on the ring" and "reveal some of its secrets".
The museum said the ring's style and material made it hard to date but it could have been made any time during the seventh to 11th centuries.


Read the rest of this article...

Archeologist who found 1,400-year-old grave of princess signs copies of his new book

ROYAL FIND: Dr Steve Sherlock, who discovered the Saxon Princess jewellery at Loftus, a piece of which is shown below, signs copies of his book at Kirkleatham Museum

THE archaeologist behind one of the most important discoveries ever made in the region held a book signing session this weekend.

Dr Steve Sherlock discovered a striking 7th century gold pendant, which would have belonged to a princess, as well as glass beads, pottery, iron knives and other objects, in Loftus, East Cleveland between 2005 and 2007.

The finds, which were described as “unparalleled” by experts, now form the Saxon Princess display at Redcar’s Kirkleatham Museum.

The Princess was buried with her jewellery about 1,400 years ago and the haul was discovered at the only known Anglo-Saxon royal burial site in the North-East. 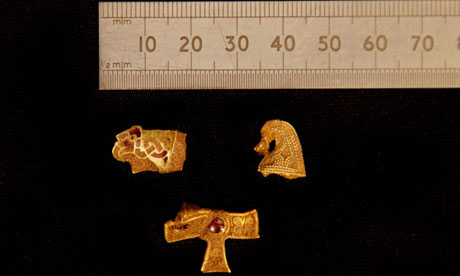 The 81 items, which date to the seventh century, will be handed to the British Museum's valuation committee to assess their worth, South Staffordshire coroner Andrew Haigh told an inquest in Stafford on Friday. It will then be up to Staffordshire county council and neighbouring councils to raise the money to buy the new items for the nation. The original hoard, with 3,900 items, was bought for £3.3m after being found in a field near Lichfield in 2009 by metal detectorist Terry Herbert. He split the money with Fred Johnson, the farmer who owned the land. Though a team from Archaeology Warwickshire discovered the second haul last year, proceeds from the sale will once again go to Herbert and Johnson. The most interesting finds included an eagle mount, whose use is not known, and a cheek piece from a helmet.

Philip Atkins, leader of Staffordshire council, said it and the owners of the original hoard, Stoke-on-Trent and Birmingham councils, would now have to look at raising money to buy the new items.

Terry Herbert from Burntwood, Staffordshire, with some of the pieces which made up
an Anglo-Saxon hoard

More than 80 Anglo-Saxon gold and silver items found buried in a field near Lichfield were ruled to be part of a collection dubbed the Staffordshire Hoard.
After they were yesterday declared a treasure trove, experts from British Museum's valuation committee were instructed to assess their worth.
Staffordshire County Council and neighbouring councils will also attempt to raise the money to buy the new items, which date to the 7th century, for the nation.
The haul will likely to end up in museums with the original Staffordshire Hoard, which was found in a field in 2009 by metal detectorist Terry Herbert, 57.