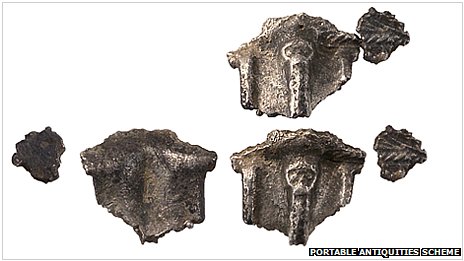 Fragments of an early Anglo-Saxon silver brooch found in Norfolk has given archaeologists new evidence of a cremation burial in the area.

The brooch, along with a Medieval copper coin-like medal known as a jetton and a Middle Anglo-Saxon sword belt mount, has been declared treasure.

An expert from the British Museum said the 13th Century jetton was "unusual".

The Oxford Experience Summer School offers weekly introductory courses in the Sciences and Humanities.  Participants stay in Christ Church, the largest and one of the most beautiful Oxford Colleges.

You can find a list of Oxford Experience archaeology courses here...

You can find out more about the Oxford Experience here...
Posted by David Beard MA, FSA, FSA Scot at 11:01

A rare Anglo-Saxon feasting hall has been spectacularly uncovered by a team of archaeologists from the University of Reading working at Lyminge in Kent. The Guardian have today featured this amazing discovery in the newspaper and on their website.

This is the first discovery of a previously unknown Anglo-Saxon ‘Great Hall' in over 30 years and one of only a handful of such major buildings to be excavated in its entirety. Large enough to accommodate up to 60 people and forming part of a formal complex of buildings, the hall would have been used as a venue for royal assemblies attended by the king and his armed entourage.

The current excavations, funded by the Arts and Humanities Research Council (AHRC) with support from project partners Kent Archaeological Society and staff from the Canterbury Archaeological Trust, are designed to shed new light on Lyminge as a key site for understanding the origins of Christianity in Anglo-Saxon England.

Saxon find in Lyminge has historians partying like it's 599 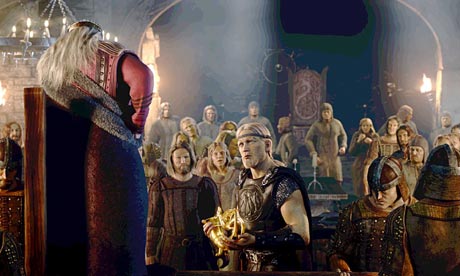 A still from the 2007 motion-capture film Beowulf. The epic poem featured a great hall of its own, Heorot, whose ‘radiance shone over many lands’. Photograph: Paramount/Everett/Rex Features
The foundations of a spectacular Anglo-Saxon feasting hall, a place where a king and his warriors would have gathered for days of drinking and eating – as vividly described in the poem Beowulf – have been found inches below the village green of Lyminge in Kent.

There was one last celebration by the light of flickering flames at the site, 1,300 years after the hall was abandoned, as archaeologists marked the find by picking out the outline of the hall in candles, lighting up the end-of-excavation party. Heaps of animal bones buried in pits around the edge of the hall bore testimony to many epic parties of the past.

The unexpected find, by a team from the University of Reading funded by the Arts and Humanities Research Council and working with local archaeologists and villagers, is exceptionally rare. Digging under the curious gaze of drinkers in the garden of the Coach and Horses pub a few metres away, it is the first great hall from the period to be discovered in more than 30 years.

Anglo-Saxon hall found in Kent is 'tip of the iceberg'

An Anglo-Saxon feasting hall unearthed beneath a village green in Kent could represent the "tip of the iceberg", according to archaeologists who believe it lies amid an entire complex of ancient buildings.

The rare 7th to 9th century hall, which would have accommodated up to 60 people during royal feasts, was the first to be discovered in more than 30 years when it was excavated by Reading University experts this summer.

But further developments are expected over the coming years as researchers plan to scour the surrounding area in the hope of finding an entire network of other buildings.

Feasting halls like the one uncovered in Lyminge, which contained jewels, animal bones and a broken horse's harness, were always part of a larger complex of houses built for accommodation and other ceremonial purposes during royal visits, experts explained.