Trusty’s Hill, near Gatehouse of Fleet in Dumfries and Galloway, is best known for the Pictish Symbols carved into a natural rock outcrop at the fort’s entrance.  However, in recent years, many historians have begun to doubt whether these carvings were genuine, some even suggesting that the carvings are forgeries. The Galloway Picts Excavation, led by the Dumfriesshire and Galloway Natural History and Antiquarian Society and funded in part by the Heritage Lottery Fund, sought to find out why there are Pictish Carvings here, so far from the Pictish heartlands in the north-east of Scotland, and if the carvings are indeed genuine.

Under the direction of two members of the Society, over 60 local volunteers, assisted by professional archaeologists from GUARD Archaeology Ltd, spent two weeks discovering new archaeological evidence that establishes a clear archaeological context for the Pictish Symbols at this vitrified fort. 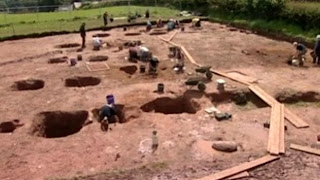 When excavation work started on Camp Farm adjacent to the Senhouse Museum archaeologists believed they were looking at late Roman buildings. Their recent find of four graves and what appears to be a church shows how life evolved after the fall of the Roman Empire.

The graves are believed to have been from the 5th or 6th century. The team to be able use the fragments of teeth and bone found buried to accurately date the site using carbon dating. 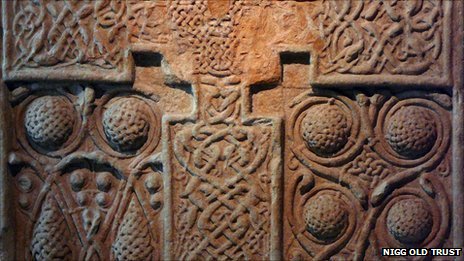 Conservation work has started on an intricately carved Pictish stone from Easter Ross.

The Nigg cross-slab dates from the 8th Century AD and features snakes and a depiction of monks receiving bread from a raven sent by God.

The monument has been taken to a workshop in Edinburgh and will eventually be put back on display at 16th Century Nigg Old Church.

The cross-slab is one of Scotland's greatest art treasures, according to the trust.
The stone's entry in the Highland Historic Environment database described it as being intricately carved.

Climate in Northern Europe Reconstructed for the Past 2,000 Years: Cooling Trend Calculated Precisely for the First Time

An international team that includes scientists from Johannes Gutenberg University Mainz (JGU) has published a reconstruction of the climate in northern Europe over the last 2,000 years based on the information provided by tree-rings. Professor Dr. Jan Esper's group at the Institute of Geography at JGU used tree-ring density measurements from sub-fossil pine trees originating from Finnish Lapland to produce a reconstruction reaching back to 138 BC. In so doing, the researchers have been able for the first time to precisely demonstrate that the long-term trend over the past two millennia has been towards climatic cooling.

"We found that previous estimates of historical temperatures during the Roman era and the Middle Ages were too low," says Esper. "Such findings are also significant with regard to climate policy, as they will influence the way today's climate changes are seen in context of historical warm periods." The new study has been published in the journal Nature Climate Change.

Was the climate during Roman and Medieval times warmer than today? And why are these earlier warm periods important when assessing the global climate changes we are experiencing today? The discipline of paleoclimatology attempts to answer such questions.