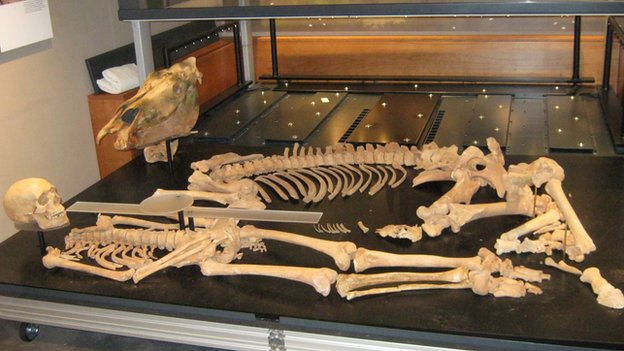 
A Suffolk museum has taken delivery of the skeletal remains of an Anglo-Saxon warrior and his horse.
The remains were found in 1997 at RAF Lakenheath and they are going on display at nearby Mildenhall Museum.
The warrior is thought to have died in about AD 500 and the find included a bridle, sword and shield.
The bones are being displayed under glass in the same position they were found in and the public will be able to see them next month.
Suffolk Archaeological Service has been in charge of the skeletons, which were part of a cemetery containing 427 graves.
The warrior is believed to have been born locally and was about 30 years old when he died.
Read the rest of this article...
Posted by David Beard MA, FSA, FSA Scot at 17:57