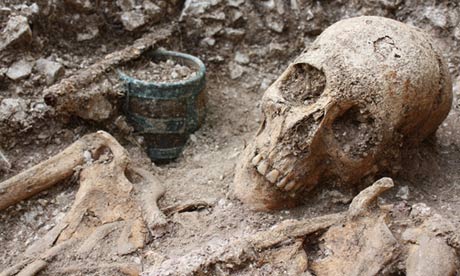 Remains of an Anglo Saxon warrior, buried with his spear and a bronze-bound drinking cup, after he was was discovered by modern soldiers on a rehabilitation programme. Photograph: Ministry of Defence
An excavation on Salisbury plain has proved an unusually emotional experience for the volunteer archaeologists, as soldiers recovering from injuries received in Afghanistan have made a surprise discovery: the remains of warriors who died more than 1,400 years ago.

Led by the Defence Infrastructure Organisation (DIO) and the Army, partners from Wessex Archaeology were astonished by the haul. Operation Nightingale is an award-winning project to give soldiers new skills and interests as part of their rehabilitation. The excavation was expected to produce modest results after earlier digs had turned up empty army ration packs and spent ammunition. Instead, they revealed their ancient counterparts, including an Anglo Saxon soldier buried with his spear and what must have been a treasured possession, a small wooden drinking cup decorated with bronze bands.