New research led by the University of Reading has revealed that finds at Glastonbury Abbey provide the earliest archaeological evidence of glass-making in Britain. 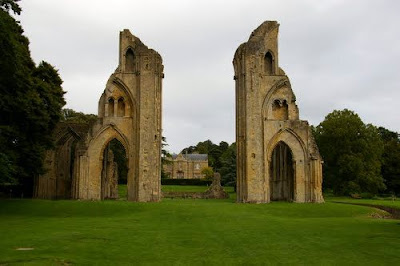 Professor Roberta Gilchrist, from the Department of Archaeology, has re-examined the records of excavations that took place at Glastonbury in the 1950s and 1960s.

Glass furnaces recorded in 1955-7 were previously thought to date from before the Norman Conquest. However, radiocarbon dating has now revealed that they date approximately to the 680s, and are likely to be associated with a major rebuilding of the abbey undertaken by King Ine of Wessex. Glass-making at York and Wearmouth is recorded in historical documents in the 670s but Glastonbury provides the earliest and most substantial archaeological evidence for glass-making in Saxon Britain.

The extensive remains of five furnaces have been identified, together with fragments of clay crucibles and glass for window glazing and drinking vessels, mainly of vivid blue-green colour. It is likely that specialist glassworkers came from Gaul (France) to work at Glastonbury. The glass will be analysed chemically to provide further information on the sourcing and processing of materials.